Playing with the Erhu 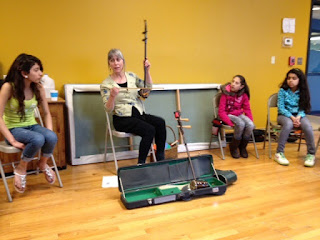 Cathy Clasper-Torch came to visit our group class yesterday to complete our "Things with Strings" trilogy.  Cathy studied the erhu while living in Hong Kong, and she brought 2 erhus with her to share with students.  After listening to the differences in sound and seeing differences in construction, each student got to play in an erhu ensemble with Cathy: adding a particular beat with one of the percussion instruments, or keeping everyone together as the conductor. 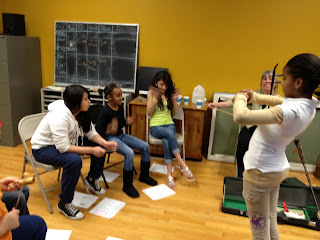 We also got to check out what music for the erhu looks like, and finished the day with a dress rehearsal for our Pawtucket Farmer's Market performance.  Next Wednesday (3/21) we'll be performing two tunes sometime between 6 & 7 pm at Hope Artiste Village (1005 Main St, Pawtucket, RI).
Posted by RI Fiddle Project at 9:21 AM No comments:

On Wednesday, April 14th, RI Fiddle Project will be visited by Cathy Clasper-Torch and her erhu!  This will conclude our series which included a visit by a string quartet, a kemanche player, and now a player of the Chinese fiddle/violin.  Want to see it for yourself?  Contact rifiddleproject@gmail.com for details, and stay tuned for what's next...Cape Verdean fiddler John Miranda and his band will be at RI Fiddle Project on Sunday, March 25th at 4 PM!
Posted by RI Fiddle Project at 9:44 AM No comments: 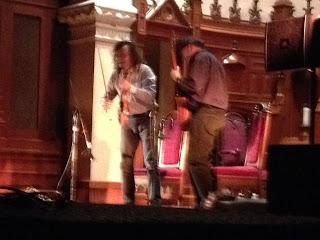 Our students were invited to attend a performance of Martin Hayes & Dennis Cahill's at Common Fence Music on March 3rd.  It was a beautiful setting inside the Channing Memorial Church in Newport, RI.  It sounded to me (Rachel) like Martin Hayes was weaving with golden thread as he played the fiddle.
Thanks so much to Tom Perrotti and everyone at Common Fence for providing such wonderful music and a welcoming environment for young fiddlers ! 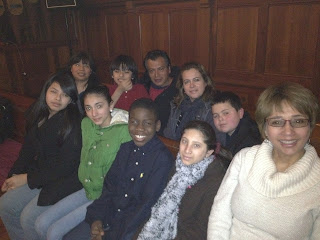 On the bus ride home, I asked students,

"How did they communicate? How did the guitarist and the fiddler know what to do at the same time?"

Here are some of the answers I got: 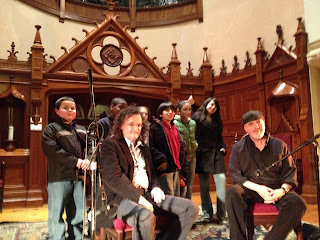 Posted by RI Fiddle Project at 1:21 PM No comments:

Here's a post from EmmaLee Holmes-Hicks at Community MusicWorks - direct from their blog, here.  Thanks to EmmaLee for inviting all of us at RI Fiddle Project to come and dance at this workshop a couple of weeks ago!

Promenade, around you go, one foot high and one foot low!

The string players of CMW and the fiddlers of the RI Fiddle Project came together on Friday, February 3 to join hands and kick up their heels in a traditional American barn dance. Outside the D’Abate School cafeteria, the imaginary snow was swirling and drifting and, underneath the virtual barn loft, the cattle were lowing and the horses were chomping down their nightly rations. But in the make-believe lantern light of the hayloft, spirits were high and the music of the Hickorynuts String Band was lively.

CMW students discovered that old-time dances were an important event in rural America. These get-togethers, with their circle mixers, reels and other “hoedowns,” helped form a bond between neighbors that was essential for survival in the old days. Laughter rang as all ages came together in that traditional blend of music and dance. As Oriana commented afterwards, “We were getting lots of exercise, but it just felt like we were having fun.” Two of CMW's Fiddle Lab students, Roma and Frankie of the now famous Red Wigglers String Band, joined us to play a set of three lively tunes. They discovered that the fiddler’s bow dances across the strings as fast as the dancers whirl and twirl. I want to thank my parents, caller Jim Hicks and backup chorder Peggy Holmes, for joining me in bringing an old-time barn dance to CMW. I also tip my hat to Alan Bradbury for setting up his sound system and for joining in with his doghouse bass. It was fun to have Alan’s wife, fiddler Michelle Kaminsky, join me in the marathon final eight-tune set. My special praise extends to the CMW students who added the most important ingredient—their enthusiastic participation. Hee Haw!
-EmmaLee Holmes-Hicks, Fellow

Posted by RI Fiddle Project at 9:04 AM No comments: